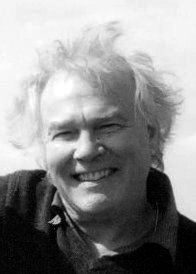 DAVID ROSS
1941 - 2012
I was a student of David Rossĺs between 1979 and 1981. I found him an intelligent, approachable teacher and he found, I suppose, someone willing to learn. When, with another of his students, I spent the summer (the first of several) in southern France to help him rebuild an old ruin, bought cheaply in the mid 1970s, that relationship was cemented. I got to know his Ĺbridgeĺ paintings too: flatly painted, paired shapes which made perfect sense to me as signs of communication: connections, made or broken between places and people. The paintings had physical, assertive surfaces, typical of the late minimalist art some of his generation were successfully pursuing at the time. However, unlike the usual formal abstraction of minimalism ľ and sidestepping direct representation ľ the visual idea of a bridge was still present. These paired objects on the wall were, once seen that way, undeniably and irrevocably bridges, but were not Ĺofĺ bridges. They contained a contradiction; an opposition that denied complete resolution, and were the stronger for it. David liked to work in series and he developed a large number of these works on canvas and in cast metal.

He helped me to get a studio in the building he worked in. I learned much and appreciated Davidĺs experience, knowledge and acute visual intelligence (and always have). I saw his work of the mid-1980s and Ĺ90s become more figurative and oddly more challenging ľ even confrontational. Using variations of the same schematic head over a coloured panel, his paintings of this period were still minimal, but done with a far lighter touch than the earlier bridges. Though more sketchy, they were weightier and more engaging than the boats, partly submerged figures and Paris Division series that had immediately preceded them. These heads were created with quick strokes, using the aleatory effects of wood dye painted on the back of the support, allowing the image to bleed and stare out at the viewer ľ literally from within the canvas . . . with the challenging imperative: ĹNot to be youĺ.

From these developed a series of character heads and landscapes, forming a group he knowingly but fondly referred to as ĹThe Most Beautiful Westernĺ. Simple types and scenes as starting points for paintings and graphic works were chosen, he told me, from the mental image bank of mostly Hollywood but also later European ĹSpaghettiĺ westerns he had grown up with ľ images remembered, imagined and reinvented, depicting vast expanses and fictitious histories.

ĹThe Most Beautiful Westernĺ was a rich seam. It allowed David in the last two decades of his life to experiment with his work from a solid base ľ to take various points of departure for paintings, using motifs rooted in the series, and extend them into new series themselves: bears; hanging men; snowscapes; Ĺartistsĺ flagsĺ and the various versions of his last series of tree paintings all started life in ĹThe Most Beautiful Westernĺ. This constant experimentation drove his painting and was exercised too in his many drawings, occasional sculptures and some photographic works.

David would discuss his work, but typically, never felt the need for lengthy exposition. Nor did he approve of much explanation on the part of other artists. His knowledge of modern art theories was thorough, but for him, the work should find its own space and not be Ĺdescribedĺ in relation to theory. David was an artist who wanted his work to be supported by nothing other than what was there in front of the viewer ľ what was visibly evident. In his relationship to his own and othersĺ work, his interest would be in the work resolving itself, as he said Ĺthough its construction and depiction rather than exhaustive interpretation.ĺ

Often in Davidĺs studio I would be confronted by a work so simple, so visually Ĺrightĺ that to talk about it directly would have been futile. The language of the tongue was frequently found wanting in the face of something so perfectly made for the Ĺthinkingĺ eye. Often, when we did talk about a specific piece of work, our words would finally stumble out as jokes ľ as if recognizing the absurdity of the situation. We knew that with words we would touch the work only at a tangent ľ and then sometimes only by way of the absurd.

David had a wonderful, playful sense of fun and loved to laugh. I have seen him breathless or rendered speechless, attempting to recount a recently heard joke (his faltering delivery sometimes funnier than the joke itself!). His voice would break into a high-pitched losing battle against a tear-filled, uncontrollable drain of a laugh that would completely consume him (so different from his usual, confident, authoritative voice). That laugh also came out as drinks in the studio or pub drew on and the conversation ľ sometimes profound, often about art, sometimes light, but never inconsequential ľ took an occasional turn, as it often did, for the comedic.

Offering no blueprint for interpretation, David Ross was an artist who painted as he felt; fully, with intelligence, passion and with great honesty. He called himself a Romantic, I would call him what he once quietly told me he would like to be recognized as (and was finally beginning to get that recognition): an accomplished and important British artist of his generation. For me he was a great teacher, a generous mentor and a very singular artist. Importantly, he has been one of my very oldest and closest friends, as I know he has been a great friend to many others he has taught, taught with, or who have shared with him in other ways a full life, lived fully.

I first met David in 1977 when I was lecturing at the then Stourbridge College of Art. He had been invited up by the Head of Department, Colin Canon. David and I immediately Ĺhit it offĺ finding many mutual interests - aesthetics, artists, authors, books, music, etc. David was by far the most knowledgeable and articulate artist it had been my privilege to meet and right from the outset he generously championed my work, an endeavour which I attempted to reciprocate.

We held a number of exhibitions together over the years, in Amsterdam, London and most recently Antwerp exhibiting with Enzo DĺAgostino at Atlas Space in London and with Franck Gribling in both his Amsterdam and Antwerp spaces.

To call David a Ĺmaverickĺ artist, while suitable, does him less justice than is deserved. He worked totally out of Ĺfashionĺ while possessing all the necessary information to have an extended dialogue on all aspects of modernism.

By 1986, having just finished the Senior Research Fellowship at the then Cardiff College of Art, I was appointed Subject Leader for painting at Wimbledon School of Art and one year later had David working with me at the school as a part-time lecturer on both BA and MA courses.

As a lecturer David's arrival in college would trigger a wave of anticipation in the student body, each hoping that they would be on his list of tutorials for that day. If not they would often request that he found time to fit a tutorial in, which more often than not he would do. In 2003 David retired from teaching to concentrate on developing and expanding his practice as an artist.

Although the world will keep turning, it will certainly be a poorer place without dear David and I for one, along with many others I know, will miss him greatly.

It was a genuine pleasure knowing you as a friend and colleague David. Amen.